NHT Global’s Cluster X2 has been created to benefit the body with increased and more efficient cell hydration. There is now adequate, independent research on the bioactivity of clustered water and how the cells are better hydrated. Science had determined that, in the human body, there are two basic types of water (biological Water): bound water and clustered water.Bound Water is water that becomes physically bound to other molecular structures and is unable to move freely through the cell walls. 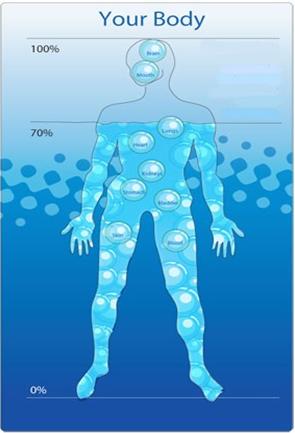 Studies have shown that the clustered water, also called ‘free’ water, is able to move freely through the cell walls and is instrumental to transport nutrients, remove waste, and maintain proper communication between the cells.

Research indicated that, when we are young, our bodies contain a high level of this remarkable water and very little bound water. However, as we naturally age, the levels of bound water increase and free water levels decrease, thus hindering the effectiveness of many metabolic functions and causing significant changes in our body’s tissues.

However, as we get older, the clusters of the water molecules change. Because of stress and pollution, toxins and accumulated wastes in our bodies gradually bind to the water molecules, enlarging and distorting them. We also know that with age and with many things we eat and drink, we actually dehydrate our cells, thus resulting in poor cellular nutrition and thus poor cell health. As the normal cluster molecules in our bodies get bigger and lose shape, it becomes difficult for water to pass through the cell wall.

The increased cell hydration after drinking clustered water can be tested and demonstrated with a Bio-Impedence Analyzer (BIA). Analysis with the BIA indicated that the BMR (basal metabolic rate) increases after 40 to 60 minutes following the ingestion of clustered water versus the ingestion of tap water or bottled water, therefore, based on science, the conclusion can be drawn that the nutrients necessary for the mitochondria to process ADP to ATP are delivered to the cell more efficiently with the clustered water. 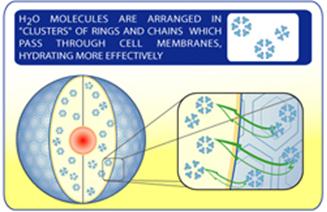 Exercise creates billions of free radicals, and the adaptogens in Cluster X2 work to protect the cell from damage, replacing intracellular water loss with Cluster X2 is very beneficial. Daily stress is a major problem, whether from emotional or physical causes, and the Cluster X2 is an amazing product in minimizing this damage to the system and encouraging cellular repair and regeneration. Once the cellular dysfunction is minimized the body begins to attain balance and healing follows.

Cluster X2 is highly purified water that has been raised to a high level of electromagnetic power through a patented process US Patent #’s: 5,711,950, Titled: Process for Preparing Microclustered Water, Filed: March 4, 1994, and 6,033,678, Titled: Microclustered Water. Filed: December 4, 1997.

The process begins with extremely pure distilled water and, while it is exposed to special ceramics, treats it with lasers and extremely strong magnetic fields to create water “clusters”. Most water is in organizations or clumps of 60 or more water molecules (H2O). The processing organizes the water molecules into clusters that are very mobile, therefore entering the cell system very rapidly and replenishing inter-cellular water. It is this restructuring that makes these products so effective in accelerated hydration through enhanced mobility.

To that base product, we added Astragalus and Schizandra, both adaptogens. Adaptogens were named by Russian Scientists in the 1940’s. First by Nikolai Lazarev, and later, further researched by Dr. I.I. Brekhman, Institute of Biologically Active Substances, Academy of Vladivostok, Russia. The definition or criteria for an adaptogen is as follows:

Where did the idea for Cluster X2 come from?

‘Healing springs’…fact or fiction? While some literally ‘staked their life’ on the water from these ‘healing springs’, such as Lourdes in Southern France and Kiromisu outside of Kyoto, Japan For years, there have been springs around the globe known as ‘healing springs’. While some believed that there was no validity to the claims, scientists were left with an unexplained phenomenon, which led to years of research.

Two decades ago, Dr. Lee Lorenzen began a research project to explain these reported ‘healing springs’. His researchers found that healing springs such as Lourdes in Southern France and Kiromisu outside of Kyoto, Japan, are effective because they contain natural clusters in the spring water. Unfortunately, to take advantage of these springs, it was found that one must drink the water at the spring (the source). It was determined that the clusters found in the spring water were unstable and, therefore, the water must be consumed within minutes after it comes to the surface. It was never successful to try to take the water away from the spring and drink it later.

After years of research and development, Dr. Lorenzen created a patented process to create stable water clusters that will last longer than the water from those ‘healing springs’.

How Cluster X2 is Made

The patented Clustered Water Template Induction Process was designed to create rings of water (5, 6, and 7 membered rings) that are collapsed around organic complexes such as proteins, amino acids and other compounds. High frequency vibration is applied to the water-protein complex using the latest in ceramic and laser technology. Prior to the end of the process the protein base is removed.

The result is a semi-liquid crystal that resonates at a designed and predictable frequency. The specific frequencies of each crystalline clustered water solution is designed to be amplified by the cells and transferred through resonant paths to tissues in need of “tuning”.

In October of 1994, Alfred G. Gilman of the University of Texas Southwestern Medical Center and Martin Rodibell of the National Institute of Environmental Health Sciences received the Nobel Prize for determining how the cells of the human body communicate with one another by sending and receiving “radio” signals. Other scientists have demonstrated that the clustered or “ringed” water that is present in the cells of all living things facilitated signal transduction.

Nobel laureate David Baltimore, a molecular biologist at Rockefeller University in New York, has stated: “Signal transduction is a whole new world of biochemical interactions, the ones we’ve always been looking for, because these are the interactions that control cell behavior.”

Robert Bell, head of the Department of Molecular Cancer Biology at Duke University, is quoted as saying: “Signal transduction is the single most important unifying concept in modern day biology and medicine.”

There is ample reason for these dramatic statements. Water plays a crucial role in cell communication and thousands of other metabolic functions, and that the cell is not the “cartoon-like” little circle and nucleus we once thought it to be. Rather, it is an extremely complex structure that utilizes organized water not only for enabling chemical reactions, but also for the receiving and sending of vital information.

Research has shown that the clustered water within the body is common in young healthy cells, but levels diminish as we age. This active, highly mobile water helps deliver nutrients more quickly, hydrates more efficiently, and promotes cell waste removal much more effectively than the “bound” water most commonly found in older cell systems.

The Russian scientist Trincher stated that: “…the water inside the living cell must be in a state of maximum order.”
The DNA in our trillions of cells is constantly transmitting information at lightening speed via resonant frequencies. And, most interestingly, the core of each DNA double helix is a column of water clusters. In addition to the clustered core of the helix, copious amounts of water are organized in multiple layers at the surface of intracellular structural proteins and membranes.
Because of the role played by this highly organized water within the cell, cells possess individual and cooperative resonant patterns that change with age, and vary relative to metabolic efficiency. The discovery of clustered water has demonstrated that these cellular resonance patterns can be enhanced, or “tuned”, producing beneficial effects on tissue and organ homeostasis.